Ford Mustang - The Ford Mustang is considered the epitome of the affordable sporty coupe, combines simple technology with high show factor. 1964 started the career of the Mustang and founded modified from the name the class of the Ponycars. German manufacturers were also surprised by the enormous success of the Mustang, Ford Capri and Opel Manta were their answers. After the oil crisis of 1973 the Pony began to lame and disappeared nearly from the picture, only 2004 took up Ford in the context of the rampant Retrowelle the striking form of the 40 years before presented first and presented a new Mustang. With the usual ingredients such as V8 engine and rigid axle, available as a coupe or convertible. 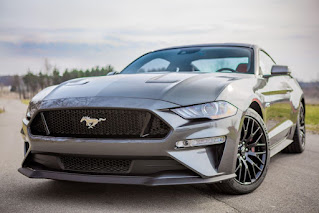 Only not in Germany. Private importers soon took over and they probably brought more of these so-called Mustang 2005 across the pond than Ford ever officially sold here before. The successor is now ready for 2015 and it is now to be imported with the blessing of the parent company via the German branch in Cologne. In order to survive in the world's most demanding market, Ford has dug deep into the technology box and given the new Mustang an independent suspension for the rear wheels for the first time. The basic engine is a four-cylinder. As an EcoBoost, however, it produces over 300 hp; the five-liter V8s that are still available produce up to 426 hp. The Pony will certainly not be a tired nag. 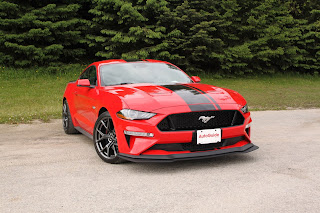 The Ford Mustang Convertible, which has been around since 1964 and just received an extensive facelift in 2018, is more distinctive and agile than any other Ford model. You can choose between a Fastback or Convertible in the body and numerous exterior colors, all of which emphasize your self-confidence. The Convertible, that is the classic convertible is perfect for summer days, when driving with a lot of horsepower in the Mustang is especially fun. Eye-catching paint colors and wheel designs, new cockpit, ten-speed automatic transmission, and two or four tailpipes depending on the engine: this is the offensive, sporty and, above all, muscular-looking Ford Mustang. 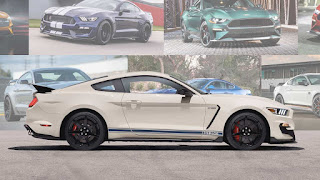 Built for the spotlight

MagneRide™ is an innovative electronic damper control system already proven in the Ford GT350 Shelby. With its sensors, it reacts in real time to road and driving conditions. The result: optimum grip for a dynamic driving experience, more control and improved handling, especially in corners. The MagneRide™ damping system is part of the Ford Mustang "Performance Package".

Ford Mustang 2.3 EcoBoost - The Sporty One

On board the 2.3 EcoBoost are many modern driver assistance and safety systems: in addition to adaptive cruise control with distance warning, LED headlights, drowsiness warning and lane departure warning, a pre-collision assist system is also available that detects pedestrians, among other things. A tire pressure monitoring system and rearview camera are also among the features. The 2.3 EcoBoost with its 290 hp unit is available from us as a fastback or convertible. **Fuel consumption 9.0 l/100 km (combined); CO2 emissions 204g CO2/km (combined). 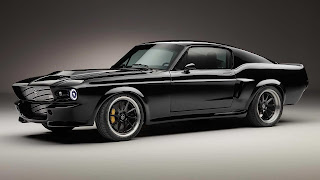 Ford Mustang GT - the muscular one

The GT (GT for Grand Tour) is characterized above all by the GT alloy wheels in 10-spoke Y design in glossy black. Other features include a special GT radiator grille and a GT badge at the rear. The twin-pipe exhaust system shows at first glance how powerful this vehicle is. With its 450 hp and powerful V8, the GT proves to be quite powerful - optionally as a fastback or convertible.

To mark the 50th anniversary of the 1968 cult film "Bullitt", Ford has created a very special vehicle: The hero of the film, a Ford Mustang GT Fastback was crowned Ford Mustang Bullitt and trumps with a five-liter VCT V8 engine with an output of 338 kW or 460 hp. This model is available in the exclusive Bullitt colors Montana Green and Venom Green and only as a Fastback. 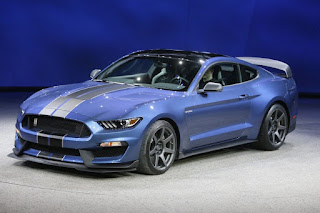 Strong, stronger, Shelby GT500! A supercharger actually increases the power of the hand-built 5.2-liter V8 to an incredible 771 hp. The maximum torque of the Ford is gigantic 847 Nm and in about 3 seconds the spurt from 0 to 100 km/h is done. Figures from another star! Power on the outside, premium on the inside: High-quality premium materials and the same kind of workmanship wherever you look. The Shelby is only available as a Fastback Coupé.